Some policy makers have questioned whether Minnesota's criminal justice system adequately deals with chronic offenders. In this report, we provide estimates of the number and types of chronic offenders in Minnesota. To the extent possible, we examine the types of sentences received by those with significant criminal records and compare their sentences with those received by other offenders. We also review what existing research suggests about the economic benefits and costs of incarcerating more offenders and discuss less costly alternatives than imprisonment.

Considering the share of convictions for which chronic offenders are responsible, there may be cost effective ways to reduce crime. But, existing research does not clearly indicate what approach policy makers should take. Studies are inconclusive about whether significantly greater imprisonment of offenders would reduce the costs of crime to victims and communities more than it would cost taxpayers. Whether more modest changes in sentencing or correctional programs, or efforts targeted at certain types of chronic offenders, would have an impact on their behavior is also uncertain.

Despite the uncertainty, policy makers may wish to consider funding some pilot programs that attempt to address problems with chronic offenders. A comprehensive integrated data system and an increased emphasis on performance measurement and evaluation should also be priorities for the criminal justice system. 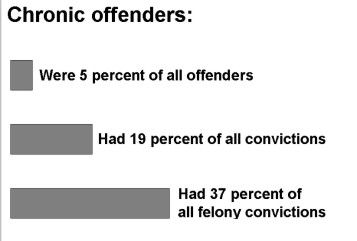 Chronic Offenders Appear to Be a Statewide Problem

Minnesota's Sentencing Policies Generally Work as Intended But Have Some Weaknesses

Generally, sentencing policies have worked to ensure that the sanctions received by a convicted felon increase with the severity of the crime committed and the offender's criminal history. But, because sentencing policies emphasize imprisonment of violent offenders, property offenders are less likely to be incarcerated than other offenders. Felony property offenders must be convicted of more offenses than most other types of offenders before the sentencing guidelines recommend imprisonment. It is probably not coincidental that 44 percent of the offenses committed by chronic offenders are property crimes, compared with 25 percent of the offenses committed by non-chronic offenders.

The use of concurrent sentencing also creates some problems in holding chronic offenders responsible for each of their offenses. Offenders committing frequent crimes may serve time in jail or prison for only the most serious crime committed, even when some of those crimes are committed in separate behavioral incidents in different counties. Limits placed on the timing of prior convictions that can be used to justify longer sentences under the "career offender statute" also tend to benefit frequent offenders. Property offenders are probably more likely to benefit from these state laws because they tend to be more frequent offenders.

Some studies have presented evidence suggesting that the high taxpayer-supported costs of imprisoning offenders may be outweighed by the economic benefits of lower crime rates to crime victims and communities. However, not all studies and researchers agree with these conclusions. In addition, there is a high degree of uncertainty involved in measuring the benefits of reduced crime rates. Because many crimes are not reported and convictions do not occur for most reported crimes—particularly property crimes—there is also uncertainty involved in estimating the number of offenses that would have been committed by offenders if they had not been imprisoned. Although Minnesota has the lowest imprisonment rate in the nation, it is unclear whether a significant increase in that rate would save more for crime victims and communities than it would cost Minnesota's taxpayers. A more targeted approach directed at chronic offenders, particularly those with any violent behavior in their history, may have greater merit.

Less Costly Options Have Yet to Be Tested

It remains to be seen how effective these types of programs will be in changing the behavior of chronic offenders or at least incapacitating them if they do not change their behavior. Given the share of serious crimes committed by chronic offenders, however, the Legislature may wish to encourage other counties or local criminal justice agencies to implement pilot programs.

Efforts to deal with chronic offenders would be enhanced by the development and implementation of a comprehensive integrated criminal justice database. Because many chronic offenders cross county lines and existing state databases do not provide information on some offenses, the implementation of a comprehensive statewide database would help district court judges and local criminal justice agencies to deal more effectively with chronic offenders. Development of a statewide database has begun but will require substantial funding before it can be completed and implemented.

The Minnesota criminal justice system would also benefit from an increased internal emphasis on evaluation of programs and performance. It is difficult to formulate strategies for dealing with chronic offenders because little is known about the effectiveness of graduated sanctions or other options. If the goal is to develop and implement effective strategies to address chronic criminal behavior, criminal justice agencies will need to evaluate whether their efforts are working.

In a letter dated February 13, 2001, Commissioner of Corrections Sheryl Ramstad Hvass said, "The report is an impressive compilation of data in an area where information gathering is difficult and complex." She added that, "This wealth of information will be invaluable to the Minnesota Legislature and criminal justice professionals as topics relating to chronic offenders are deliberated."

Commissioner Ramstad Hvass, who is also chair of the Sentencing Guidelines Commission, said that she would refer the report to two subcommittees of the commission—one on non-imprisonment sanctions and the other on drug policy. Some of the data in the report are directly relevant to the issues these subcommittees are currently studying.

Finally, Commissioner Ramstad Hvass emphasized that, "Dealing with chronic offenders in cost-effective ways that protect the public is a priority for all of us in the criminal justice system."

The Program Evaluation Division was directed to conduct this study by the Legislative Audit Commission in April 1999. For a copy of the full report, entitled "Chronic Offenders (01-05)", 106 pp., published on February 22, 2001, please call 651/296-4708, e-mail Legislative.Auditor@state.mn.us, write to Office of the Legislative Auditor, Room 140, 658 Cedar St., St. Paul, MN 55155, or go to the webpage featuring the report. Staff who worked on this project were John Yunker (project manager), Valerie Bombach, and Carrie Meyerhoff.