Office of the Legislative Auditor


The Secretary of State is Minnesota’s chief election official. The Office of the Secretary of State (OSS) Elections Division, partnering with county, city, and township election officials, is responsible for the administration of elections. One of the key elections tools managed by OSS is the Polling Place Finder application, which provides website visitors with voting information relevant to their unique locations. However, on the morning of March 3, 2020, Minnesota’s first presidential nomination primary since 1992, the Polling Place Finder application encountered performance problems that required OSS to activate its Emergency Elections Plan. OSS redirected visitors to an alternative website for similar information: 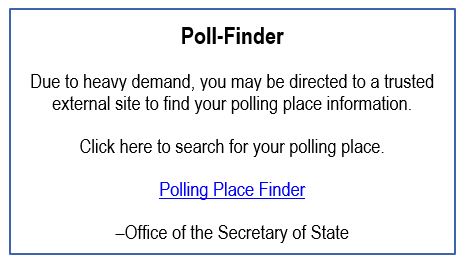 For 17 minutes, Minnesotans seeking nonpartisan voter information were directed to a website run by a partisan political group. Given the expectation that OSS should not interject partisanship into its administration of elections, this action created controversy and concerns.

First, OSS staff were not familiar with the specific procedures for redirecting visitors from its Polling Place Finder to an alternative solution. In addition, the office emergency plan lacked a detailed definition of an appropriate alternate polling place locator website. These factors, plus a series of missteps by key staff members, resulted in OSS posting a hyperlink to a partisan website. This partisan website also included a registration form where some Minnesotans voluntarily provided their contact information.

Based on our assessment, the March 3, 2020, incident was not the fault of a single OSS staff member, but several OSS employees. While they share responsibility for the incident, we did not find evidence of malicious intent or political motivation by any staff members in the Office of the Secretary of State.

Finally, we believe that OSS took appropriate and necessary steps to help prevent a similar incident from occurring during future elections. However, we provide additional recommendations to OSS to strengthen their system resiliency and emergency preparedness.